Consider this the third in a trilogy of today’s posts about animals.  This week, Roger Cohen of the New York Times did an op-ed post about the practice of eating dogs in China.  They eat cats too, but he confined his comments to dogs.

I once saw a TV documentary which showed a restaurant in Asia that specialized in cats;  it wasn’t China–maybe Laos, Cambodia, or Vietnam.  In any case, the restaurant had a cage out front full of cats where you could select your own personal cat to eat.  Once you made your choice, they would dip the cat into boiling water (while still alive) in order to more easily remove the skin and fur.  Barbaric?  What, I ask, is the difference between that and lobster tanks?  Answer:  No difference, except for the animal involved.

Cohen’s oped was very surprising…usually he does strictly political stuff and seems to be the Times’ expert on Iran and Europe.

But he tells a story of going to a dog restaurant in China with his interpreter, who assured him that dog was very good.  He had a sort of dog soup, and bypassed the other items on the menu which included dishes containing dog paws, tail, brain, intestines, or penis.  Are you gagging yet?  Yes.  Me too.  But, as Cohen points out, that’s illogical.

Why is it okay to eat a pig/cow/goat/lobster, but not a dog/cat?  Why is it okay to kill and/or eat some animals, but not others?  Good question.  Thought of in that way, it’s a little hard to define “barbaric”.

That of course brings me to another NPR snippet.  An interview with Temple Grandin, an autistic woman who claims to have a special ability to identify with and understand animals, which would make sense given the non-verbal nature of their communications (hers and theirs).  Her big claim to fame is redesigning stockyards so as to calm cows before they go to slaughter.

In interviews, and I’ve heard another one before now, she’s treated as if she’s an amazing person, which, in a sense she is.  But I find her creepy and repellent.  She admits she feels no emotion.  She invented for herself a “hugging machine”.  She can’t bear to be touched, but noticed that the cattle on her aunt’s farm while she was growing up seemed to be calmer while restrained in pens awaiting vaccination.  So with her aunt’s permission, she placed herself in those restraints and felt calmer.  Then she invented a smaller one for herself.  It’s the pressure of the restraints, minus the human component of an actual “hug”, that calms her and makes her feel safer.  She noted that she doesn’t get to use her device any more as much as she would like, because she travels so much.

But when your claim to fame is calming cows before slaughter, and other people treat you as if you are an amazing rather than an aberrant human being, then may I suggest you go into the dog/cat/lobster calming business as well.  Also, use your creative skills to come up with a battery-powered substitute for your hugging machine that will fit into your suitcase and won’t scare Homeland Security.

More from Jane Goodall’s book “Hope for Animals and Their World”.    I’ve deliberately chosen here to highlight a non-warm and fuzzy example of why we should care about whether or not species become extinct.  Just about everyone cares about pandas–I say just about everyone, because there are people who say that pandas are doomed, and the time and resources put into them would be better spent on species with a greater chance of survival.

And speaking of pandas, who wouldn’t become a bit teary-eyed over the relocation of the young pandas Mei Lan and Tai Shan from the U.S. back to China…via Federal Express. 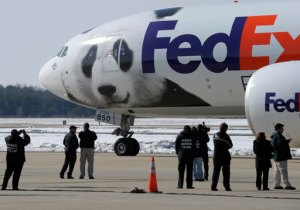 Meet the Lord Howe Island Phasmid, aka the Land Lobster:

Okay, it’s a little creepy looking, but its story is phenomenal.  It was thought to be extinct some time in the 1920’s.  Then in 2001, scientists came upon a few live ones clinging to one single melaleuca bush on nearby Ball’s Pyramid: 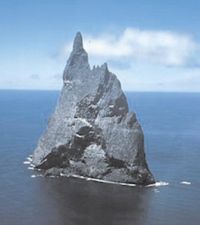 Who can imagine a more inhospitable place to live?  And yet there they were.  It illustrates Jane Goodall’s point about the resilience of life.  To paraphrase Shakespeare, life will out.  Anyone who has ever climbed over a barren rock and seen some tiny sprig of something green knows the truth of this.

So why we should care is this:  without creatures such as this, we would not be reminded so often of the fierce determination and ultimate mystery of life itself.  We would think our struggle to survive is ours alone, and it is not.

I have at long last finished Jane Goodall’s book Hope for Animals and Their World.  To start, I’ll quote the dedication in its entirety:

“This book is dedicated to the memory of Martha, the last passsenger pigeon–and to the last Miss Waldron’s colobus and the last Yangtze River dolphin.  As we think of their lonely end, may we be inspired to work harder to prevent others suffering a similar fate.”

The  book is subtitled “How Endangered Species Are Being Rescued From the Brink”.  It tells the stories of many different animal species, and the remarkable people who have devoted their lives to saving them.  In some cases, the animals became extinct in the wild when scientists captured the last known living examples of the species in order to create a captive breeding program.  The goal, ideally, being to repopulate the species in the wild, or at the very least, to preserve the species even if it has to be in a zoo or a small nature preserve.

Dr. Goodall’s take on it is always overwhelmingly positive, but the stories are heartbreaking nonetheless.  Time and again, the primary reason for the loss or near loss of a species is loss of habitat.  And loss of habitat is due to human overpopulation.  There are more immediate causes of animal extinction such as the accidental (or sometimes deliberate) introduction of non-native species which either outeat or outright prey on the native animals.  Dogs, cats, and rats are most common.  There are introduced poisons, such as lead and various pesticides.  But these too go back to the issue of human overpopulation.    I have no solution to that.  I’m just stating the fact.

At the moment, I’ll confine myself to why Jane has hope.  I personally don’t see much.  I fear that one day all the magnificent animals on our planet will be confined in zoos.  But not Jane.  The last section of the book is called “The Nature of Hope”.  She says she has four reasons for hope: our extraordinary intellect, the resilience of nature, the energy and commitment of young people, and the indomitable human spirit.  In that section she also addresses the issue of why we should save endangered species anyway.  And she says, we do it for love.

In that regard, I heard an oddly related snippet of an interview yesterday on NPR with Jeremy Rifkin, who has a new book called The Empathic Civilization.  Rifkin is an economist and senior lecturer at the Wharton School of Business.  His point is that our ability to connect with one another globally is broadening our identification with others beyond family, tribe, religion, and nation, making us the empathic civilization.  And we increasingly embrace not only each other but the other species on our planet.  I truly hope he is right.